Photo radar speed cameras use a camera to capture images of vehicles travelling in excess of the posted speed limit.

As of 2020 most speed cameras are situated in school and community safety zones. 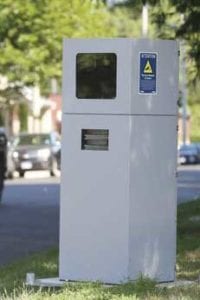 When vehicle passes a speed camera system and the detects that the vehicle is speeding, a picture of that vehicle is taken.

Once the information is recorded the phone is viewed by a Provincial Offences Officer.

Once the officer has confirmed that the vehicle was speeding, a ticket is issued.

The tickets are mailed to the registered address of the owner of the vehicle.

Photo radar tickets penalties are in the same category as parking tickets, meaning:

As of 2002 there are no insurance implications for photo radar tickets.

Photo radar tickets do not go the owners driving records or insurance.

Insurance providers are not given access to the municipal information gathered from these traffic tickets.

The reasoning being that the driver is not identified by the camera system.

Photo radar tickets have the same weight as parking tickets which do not affect insurance rates.

What Happens if You Don’t Pay the Ticket

Photo radar tickets are issued to the owner of the motor vehicle.

Where the owner refuses or neglects to pay the fine, the fine is then placed upon the vehicle licence (licence plates).

Upon renewal the owner will subject to a “Plate Denial”.

Plate denial means, that the speeding ticket fee will be added to the plate renewal.

The owner will not be allowed to renew the sticker without paying the fine.

Most legal advocates will advise that there is no merit to fighting a photo radar ticket, because:

As the fine is the only penalty, there is no merit in paying a fee to a paralegal or lawyer to dispute a fine.

Where the fine is excessive, the owner may wish to appear at court and request a reduced fine.