Photo radar speed cameras use a camera to capture images of vehicles travelling in excess of the posted speed limit.

In 2020 the Ontario government legislated the use of speed measuring photo radar cameras. 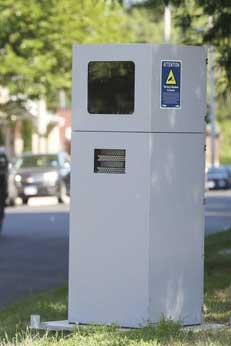 When a vehicle is detected speeding, the camera system takes a picture of the licence plate of the vehicle.

When vehicle passes a speed camera, the radar system within the speed camera measures the speed of the vehicle.  Where the vehicle is travelling over the speed limit, the camera takes a picture of the licence plate.

The information and photograph are recorded and stored within the unit.

A Provincial Offences Officer reviews the information received from the photo radar camera and confirms that the vehicle was speeding.

Where the officer believes the vehicle was speeding, the officer mails a speeding ticket to the registered address of the owner.

Photo radar tickets penalties are in the same category as parking tickets, meaning:

As of 2022 the provincial government has removed the fee to renew a vehicles licence plate.

Subsequently for persons who decide not to pay the fine, there is no current enforcement, other than a late fee.

Upon selling or buying a new vehicle the fine would have to be paid before a new licence plate would be issued.

Photo radar tickets do not go the owners driving records or insurance, nor are insurance providers given access to the information.

The reason photo radar tickets are not associated to the driver is because, the driver is not identified by the camera system, only the vehicle.

Photo radar tickets are issued to the owner of the motor vehicle, the penalty goes against the vehicle, not the driver.

Where the owner refuses or neglects to pay the fine, the fine is then placed upon the vehicle licence (licence plates). Upon renewal the owner will subject to a “Plate Denial”. Plate denial means, that the speeding ticket fee will be added to the plate renewal.

The owner will not be allowed to renew the validation of the plate without paying the fine.

Most legal advocates will advise that there is no merit to fighting a photo radar ticket, because:

As the fine is the only penalty, there is no merit in paying a fee to a paralegal or lawyer to dispute a fine.

Where the fine is excessive, the owner may wish to appear at court and request a reduced fine.