What is Police Radar?

Radar is a radio wave sent from a radar transmitter. The radio wave hits a moving vehicle, then is bounced back to the receiver.

The radar measures the time the radio wave takes to go from the police vehicle to the target and back.  The transmitter then calculates the time giving a speed.

Radar is a Radio Wave

As radar is a radio wave, the radar beam travels at the speed of light. 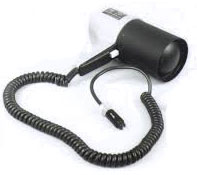 A Radar Transmitter is a device that oscillates an electrical current so the voltage goes up and down at a certain frequency.

A transmitter also has an amplifier that increases the intensity of the electromagnetic energy and an antenna that broadcasts it into the air..

Radar is the use of radio waves to detect and monitor various objects. The simplest function of radar is to tell you how far away an object is (distance).

To do this the radar device emits a concentrated radio wave and listens for an echo or signal back..

If there is an object in the path of the radio wave like a speeding car, it will reflect some of the electromagnetic energy and the radio wave will bounce back to the radar device.

Radar Travels at the Speed of Light

Radio waves move through the air at the speed of light, so the radar device can calculate how far way the object is based on how long it takes the radio signal to return. (time verse distance)

The speed of light is normally rounded to 300,000 kilometres per second or 186,000 miles per second. Radar can also be used to measure the speed of an object, due to a phenomenon called Doppler shift.

Like sound waves, radio waves have a certain frequency, the number of oscillations per unit of time. When the radar gun and the car are both standing still, the echo will have the same wave frequency as the original signal.

If the car is moving toward the radar gun, the second segment of the wave travels a shorter distance than the first segment before being reflected. As a result, the peaks and valleys of the wave get squeezed together: The frequency increases, based on how much the frequency changes, a radar gun can calculate how quickly a speeding car is moving toward it or away from it.

If the radar gun is used inside a moving police car, its own movement must also be factored in.

This radar is called obviously, Moving Radar. If the radar gun determines that the target is not moving toward or away from the police car, than the target is driving at exactly 50 miles per hour.

Simply put the radar antenna sends out a signal, the signal bounces off the speeding car back to the receiver.

The control unit then measures the difference time and distance and calculates it as a speed. (Speed = Time X Distance) The range of a radar unit is anywhere up to approximately 300 metres.

The distance is dependent upon the time of day, the weather, the amount of traffic, the type and size of vehicles involved and the individual strength of the unit. Radar will pick up the largest, strongest signal.

Factors as weather, rain and snow can affect the ability of the radar unit to send and receive.

So on a quiet summer night with clear skies a radar unit would pick up a lone truck traveling toward you at a much longer distance that a small car in light rain on a busy day in traffic. Another example is a motorcycle although traveling a high rate of speed is much harder to “pick out” than a normal sized car.

Also a fibreglass car such as a Corvette will absorb most of a radar beam until it hits the metal, engine area of the car.

Radar picks up the largest, strongest, object, not always in that order. Radar on a multi lane highway usually requires some interpretation of the readings received by the officer therefore although the officer is required to take a required course in the theory and operation of radar experience is important.